Here’s wishing everyone a very Merry Christmas! I want to take this opportunity to tell you a true story. It didn’t take place at Christmas. It doesn’t talk of Christmas trees or jingle bells, but to me, it is kind of Christmassy, in that it demonstrates, I think, that we are not alone in this world.

I have something amazing to share with you. I hope you will enjoy hearing about it, at least half as much as I have enjoyed the experience. This is a true account of something that happened to us after the seminar I gave on MMS and Longevity this past April. For one reason or another, I have not been able to share this before now, but I think it’s appropriate to do so at this time, and after all, it’s Christmas, a time when magic things can happen.

The MMS Longevity Seminar was fantastic, we had a real good group of people and we all had fun. A couple weeks after the seminar ended, the home where we were staying (as guests) was burglarized. Thieves scaled the wall and broke into the second floor of the house early in the morning, before day break. While we were sleeping, they stole our computers, wallet/purse, funds, cards, phones, and other important items for our work.  It was devastating, to say the least.

That day was spent contacting various agencies, banks etc., changing passwords, and doing all it requires to guard from identity theft, among other things. It produced a great amount of strain, especially for my assistant who handled most of the details (with the help of our hosts). I helped as I could, but she did most of the telephoning and picking up the pieces because she hears best on the phone. One goes through such a wide range of emotions when such an event occurs, and there is a large measure of stress and pressure to move as quickly as possible to get things handled properly.

But, an amazing thing happened later that day. In the evening (the day of the robbery) as Cari was sitting at the desk in her room, working with a borrowed computer (about 8:30pm), she happened to glance down at the floor and to her surprise there was a little bird sitting there, not more than three feet away from her feet. It was about the size of a sparrow. Cari froze, and just sat there in amazement watching the bird, not wanting to scare it away. She assumed the bird must have flown in through the door to the small balcony, which was open at the time, but she did not see it fly in. The bird was just there.

After about 20 minutes, the bird started hopping around exploring the room, looking here and there and occasionally ruffling its feathers. This went on for half hour or so. Cari later explained to me how she just sat there watching the bird as he hopped around on the floor. He went all around under the bed, and then came back out again, explored by the dresser and the closet and so on. She explained how many things were going through her mind as she was watching this bird, she being mostly amazed that the bird did not seem in the least bit startled by her presence. Cari said she kept thinking how little the bird must have felt. Picture a tiny sparrow on the floor next to a big dresser the length of the wall, a tall chest of drawers, a bed and so on. She said she was thinking the bird must feel so small compared to all the furniture in the room, and that everything around it was like huge mountains in this closed-in space. Then, as Cari was thinking all these thoughts of how small and even helpless the little bird must have felt in this room of giant mountains [furniture] she said it was as if the bird spoke to her—not audibly, but by telepathy, but the words were definite, and the bird said so clearly, “I might be small, but I can fly!” And then the bird said, “It might seem like I am surrounded by mountains, but I can fly!” Then, a minute later the bird said, “You can fly too!”  Like I said, it was not an audible voice, but Cari said she heard this clearly. I think it was a mental or spiritual communication, but it doesn't matter, it still produced the same results. Cari said she was so encouraged by the message the bird had given her. Then the little bird said to her, “Don’t worry, everything will be OK.”  It was a tremendous comfort to Cari after the stress and trauma of the day, and she began feeling much better. 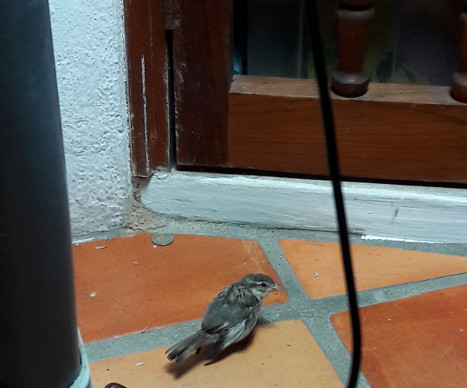 Then after this communication, the bird flew up to a steel strut on the back of the desk where Cari was sitting, (almost level with the desk top).  The bird didn’t seem the least bit afraid or worried about Cari working on the computer, about 1 foot (30 Centimeters) away, and he remained on the steel strut, watching Cari work, looking around the room, and occasionally ruffling it feathers, for over an hour. Then it flew back down to the floor and sat there in the same spot when Cari first noticed it. At that point, I walked in the room and again, the bird appeared perfectly comfortable with me being there as well. Cari began telling me about the bird. We wondered if maybe he was sick, though he didn’t really appear to be, the bird was calm, somewhat serene and was not the least bit bothered by our presence. 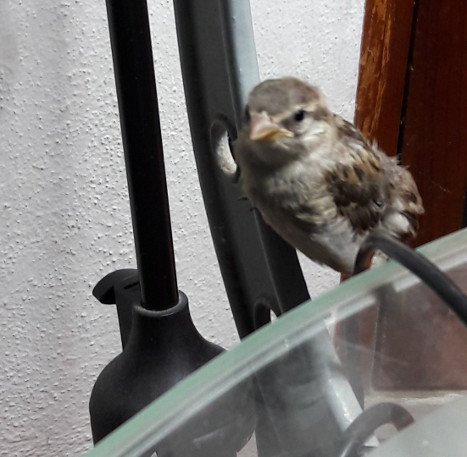 We had to discuss some business for a few minutes and during that time our focus was not so much on the bird, then we noticed the bird had flown up on top of Cari’s suitcase that was on the dresser.  It flew there, we assumed, but we didn’t actually see it fly up there.  Cari went and got some seeds and put them on the suitcase and her hand passed very close to the little bird, but again the bird was not startled or scared off in the least. I got a bowl with some water and put it on the suitcase and he hopped around on the suitcase and across the water a couple of times. The suit case was on its side with two of the wheels on the end sticking out and the little bird perched there on one of the wheels.

Like I said, we thought maybe the bird was sick and needed a place to stay.  But he didn’t seem to be sick. I assumed if he was sick he would have settled down somewhere, but he did a fair bit of exploring around the room for quite a while and only settled down about 1:00am.

He sat on the suitcase the rest of the night, still seeming perfectly comfortable. When someone invades your privacy such as the thieves did, it can rattle you a bit and it is unsettling. Cari said the bird’s presence in the room during the night brought her a very welcome peace and calm. In the morning he chirped a bit (as if to give a wake-up call?).  I got some more seeds of which he ate quite a few and he walked across the water a couple more times. Cari said he drank a few times. Then as we went about our business, mid-morning the bird was gone.

Never in my life before this, and Cari said the same thing, did we ever have a little bird come to spend the night and then be gone the next day. So what do you think?  Did a bird sense our upset and come to help?  Did a spirit change into a bird and come to give comfort?  Was the bird an angel in disguise?  Did a being from another dimension think we needed some help? Or did a local bird just get sick and fly into the first place he could see for protection in the night, which just happened to be on the one day that we were shaken?

If any of you have any thoughts on this, send your email to this address: I’m curious to hear what you have to say as the “little bird” experience was really something new for me.

How many people have had a little bird that was totally unafraid of us humans, come and stay the night with them this past year? Or any year?

Ok folks, we wish you all a very Merry Christmas! Don't forget, even in this busy time of the year, take time out to notice the things around you, maybe a little bird wants to talk to you. Or, maybe someone needs a smile, a pat on the back, or for you to lend them a hand. Keep doing the right thing and help one another.

As always good fortune along the way,

Reminder: Send any comments to

Video section
Disclaimer: These statements have not been evaluated by the Food and Drug Administration. This substance, MMS (Master Mineral Solution), has not been FDA approved to diagnose, cure, mitigate, treat, or prevent any disease. Chlorine Dioxide is also called MMS throughout this website. Chlorine Dioxide Solution also known as MMS (Master Mineral Solution) is made of Sodium Chlorite 28% (22.4 Sodium Chlorite 5.6% Inert Salts and the remainder water) and an acid activator (usually 50% Citric Acid or 4% Hydrochloric Acid). License: Except where otherwise noted, content on this site is licensed under a Creative Commons Attribution-NonCommercial-NoDerivs 3.0 Unported License.
Jim Humble's Website