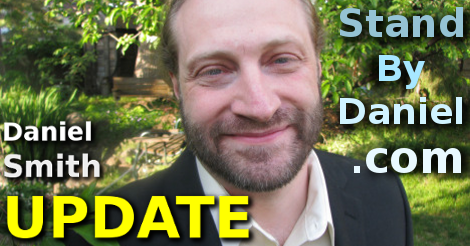 
Below is information on Daniel Smith’s hearing and conviction written by his father, Larry Smith. The information is in chronological order from the date of his hearing/sentencing. We continue to Stand By Daniel.

If you want the Birds Eye View although the Judge originally gave Daniel 53 months—after a turn of events Dan will serve about 39 months in a Federal Farm thanks to dramatic reductions by the Judge. THANKS FOR ALL OF YOUR PRAYERS AND EFFORTS IN HIS BEHALF. (For those interested in the full story of how this came about and what went on in the court room,  enquire at:  This email address is being protected from spambots. You need JavaScript enabled to view it.

Quick Intro: Over 2,700+ people signed the petition asking the Judge to be Lenient in the sentencing of Louis Daniel Smith. The Petition site told me to declare Victory which effectively closed the signing of the petition. When I did so – Change.Org notified all 2,700+ signers by email.

When I realized this – I added an email address for all future updates about Daniel rather than continue using Change.org. Since I’m his father I hope my info will be accurate and timely. Dan and I speak frequently by phone.

Since I made this offer hundreds of supporters have sent emails asking to be sent update emails. So I am including each of them and you original supporters in each email update.

Daniel is currently under the control of the U.S. Marshall Service. The Marshals have temporarily jailed him in Kennewick, WA. If you wish to write him (and he hopes you will!!) be aware he can be transferred anywhere without notice. Thus if you do write don’t put it off.

Once the US Marshall Service makes arrangement with the Bureau of Prisons (B.O.P.) Daniel will likely be transferred to a “Prison Camp.” (At least that is customary). It is supposed to be within 500 miles of Spokane…but the B.O.P. makes the final decision.

The length of his incarceration ~ initially the Judge gave him 53 months ~ is not certain until the B.O.P. makes its calculation. The estimation made by Dan’s Court Appointed Defense Attorney (advisory role only) for the sentencing hearing is 39-40 months…because the B.O.P. subtracts some of the time already served and a 15% reduction the Judge ordered. He also could receive time off for good behavior…maybe 6 months. For those of you who want more of an exact and definite number of months Dan has to serve ~ disclosed today…that cannot be done. Once the B.O.P. posts one I’ll send out an update.

One very significant ruling by the Judge that I failed to mention is she ordered the Prosecution to refund all of the funds the Government seized from Dan years ago…somewhere around $30,000+ AWESOME.

Please feel free to write to Daniel at the following address:

Remember don’t let any grass grow under your feet or he may be transferred before your letter arrives. I am mailing him a collection of each of your emails and comments…somewhere around 100 pages.

Dan requests your prayers regarding:

The Appeal(s) being sent to the 9th Circuit Appellant Court in San Francisco.

In addition he is asking the 9th Circuit Appellant Court to release him while the Appeal processes through the system. And he may also need prayers for other documents which may be necessary at a later date.

I’m sure I left something out, confused some folks, etc. If indeed you need an explanation or let me know of a glitch please feel free to let me know:
This email address is being protected from spambots. You need JavaScript enabled to view it.

I ask you to humor this old man and know I’ve exceeded “my pay grade.”

Daniel is now posted in the Bureau of Prison’s Data Base (B.O.P.)

But the exact quote is below and states: He is “NOT IN BOP CUSTODY.” I suspect this is because the US Marshals are still holding him in their custody in the Kennewick, WA contracted Jail. (It has city, county, state and Federal Inmates) in different buildings.

One phone update from Dan late yesterday:
“Dad this jail (Kennewick) is worse than the former one in Sunnyside, WA, but much better than the Spokane jail.”

Quote from BOP data base:

I’ll continue to update when appropriate.

If you wish to request anything additional or have any
questions answered please contact This email address is being protected from spambots. You need JavaScript enabled to view it.

Yesterday Daniel’s DEFENDANT’S MOTION FOR RELEASE PENDING APPEAL was filed with the Court Clerk and appears on the Court Docket now.

Likely legal red-tape will shuffle this Appeal around for several days. Only one support letter will reach the Judge before her decision…as Dan’s defensive advisors felt like the Judge might get irritated by a batch of mail like what she previously received.

As of late today Daniel is still in the Kennewick, WA jail under custody of the U.S. Marshal’s Service. The Bureau of Prisons (B.O.P.) still has not stated where he will be imprisoned. A worry, though hopefully soon corrected, is the assurance that Daniel’s53-month sentence will be reduced for the time he has already served plus an additional 15% credit reduction mentioned by the Judge has not been signed by the Judge yet.

This was not seemingly the Judge’s fault at all – just a required form that Dan’s team had not prepared in time. Hopefully that formality will be concluded in the near future.

Daniel has a superb inner circle of wise assistants and supporters. I really appreciate them.

For you Prayer Warriors and hundreds of other supporters receiving this update this DEFENDANT’S MOTION FOR RELEASE PENDING APPEAL is in the Judge’s hands. If she rules for Daniel he could be home for the Holidays. If she says, “No!” than an updated appeal will besent to the 9th Circuit Appellant Court in San Francisco.

Quick and decisive action by Daniel’s team got this on the Appellant Court’s Docket perhaps a year sooner than anticipated in case Judge Peterson denied this Motion. They deserve Thanks for their foresight and preparing for this eventuality.

Should this be in the hands of the 9th Circuit Justices in its expedited time, as now scheduled, their decision probably will still not be known until around April 2016…or even months later if they request Oral Arguments from the Prosecutor and Daniel’s team. In this case Daniel would remain in Jail during those months.

This is another opportunity for heavenly intervention …thus please trust and intercede that the Judge will grant Daniel’s release before the holidays.

Good Things Are Ahead,