Please sign the following petition that brings to light Daniel Smith's struggle, who is facing 37 years, to fight and reform the very system intended to protect our constitutional rights.

Call on Congress to impeach corrupt DOJ attorneys and federal judges, and to enact reform today.
by Hunger For Justice: StandByDaniel.com 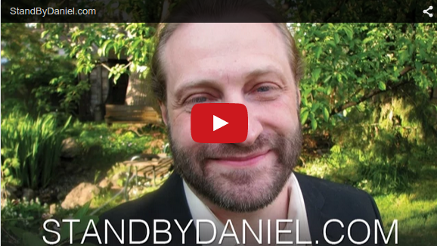 Daniel Smith is facing 37 years in prison under a vindictive and political prosecution. In 2010, he and his family unwittingly became the victims of FDA fraud and malfeasance. This would be followed by selective targeting, prosecutorial abuse, and judicial misconduct - all sanctioned and supervised by the U.S. Department of Justice.

In December of 2014, a 5-minute video was released entitled, "MMS On Trial : A Message by Jim Humble" to help raise awareness and funds for Daniel's Smith's defense. In less than 30 days, the video would be seen in 163 countries and thousands of people would begin to Stand By Daniel.

Daniel Smith has begun a Hunger Strike in solidarity for liberty and justice - and to implore the 114th U.S. Congress to act - to stand by, for and with thousands of supporters worldwide to put an end to an "epidemic" of prosecutorial and judicial misconduct in the federal criminal justice system.

The time has come for Congress to follow in the steps of the "Good Parliament" - to impeach all levels of misconduct from the DOJ to the judiciary, and to set wayward federal agencies like the FDA back on track.

Some of the misconduct in Daniel Smith's case includes the following:

• Threats by the prosecution to coerce pre-indictment plea bargaining

• Withholding and delaying the release of exculpatory evidence

• Unlawful sale and conversion of seized property prior to forfeiture

• Utilizing known false and misleading testimony before the trial court

• Employing coercive tactics to pressure defense witnesses not to testify

• Use of knowingly fraudulent data in expert opinion

• Overstating the strength of evidence to enhance plea negotiations

• Defamation of defendants' character and reputation in the media

• Use of false, misleading and extrajudicial statements in the media designed to arouse public indignation

• Failure to conduct fair hearings and to report prosecutorial misconduct

By and through this Petition, we the People respectfully move each and every Honorable Member of the U.S. House of Representatives to commence an investigation into the acts of certain officials, named and unnamed, of the U.S. Food and Drug Administration, the U.S. Department of Justice, and the Federal Judicial District of the Eastern District of Washington, through the adoption and/or resolution of draft articles of impeachment published herewith. See http://www.StandByDaniel.com.

By and through this Petition, we the People further move upon Congress to enact various reforms that will restore the public's confidence in the American criminal justice system and breathe new life into the lost sentiment of "liberty and justice for all."

A. INVESTIGATE REPORTS AND IMPEACH PROSECUTORAL AND JUDICIAL MISCONDUCT

Considered by many to be the greatest jurist of his era, Sir Edward Coke asserted that a corrupt judge was the greatest of all grievances, for he harmed the commonwealth more than anyone else because he made every subject a tenant at will for his rights.

More recently, former Chief Judge Kozinski of the U.S. Court of Appeals for the Ninth Circuit opined: "There is an epidemic of Brady violations [i.e., prosecutorial misconduct] abroad in the land. Only judges can put a stop to it.”

At the outset of this Petition, the prosecution in Mr. Smith's case has continued to withhold now, for two years, the sworn statements, names, and contact information of hundreds of witnesses favorable to the defense and which could alter the outcome of the case. Moreover, the prosecution has taken affirmative steps to bypass the agency's own "firewall" and to avail itself to hundreds of attorney-client privilege communications bearing on defense strategy. A review of the record by any unbiased party can see that the U.S. Department of Justice is working in concert with the District Court of the Eastern District of Washington to bring about an unjust end.

Judge Kozinski of the U.S. Court of Appeals for the Ninth Circuit recently asked a deputy attorney general during a hearing whether or not his supervisor wanted to defend a conviction "obtained by lying prosecutors." If so, Kozinski warned, the court would "name names" in a ruling that would not be "very pretty."

"The 9th Circuit keeps seeing this misconduct over and over again. This is one way they can really call attention to it." ~ Gerald Uelmen, of the Santa Clara University School of Law

The time has come to name names. By and through this Petition, we the People move the U.S. House of Representatives to commence investigative and impeachment proceedings against various individuals involved in the misconduct in Daniel Smith's case, including but not limited to:

Very few federal judges have been impeached in American history - only 15 - but not for lack of judicial misconduct, which is reported now almost daily in the news. Even fewer federal prosecutors have been impeached; in fact the number is ZERO. This is in spite of the fact that, as noted by the Ninth Circuit, prosecutorial misconduct has reached "epidemic" proportions.

This epidemic will persist until Congress acts to change the present trajectory of our criminal justice system by impeaching misconduct at every level and enacting reforms to curb abuse by individuals representing the executive and judicial branches of government.

"Unless and until these [individuals] are convicted in the court of public opinion, or disbarred, these very powerful and politically connected [persons] are still licensed to lie." ~ Sydney Powell, Author of Licensed to Lie: Exposing Corruption in the Department of Justice (2014)

It is the most important duty of the legislature to investigate and restrain the executive. That is the purpose of representation.

B. ENACT VITAL REFORM TO CURB PROSECUTORIAL AND JUDICIAL MISCONDUCT IN THE FUTURE

A growing list of essential reforms that we the People respectfully Petition the U.S. Congress to enact, include the following:

• In every criminal case, prosecuting attorneys must certify, under penalty of perjury, that they have timely provided to the defense all exculpatory evidence

• Targets of criminal investigations whom request in writing an opportunity to testify before an investigating grand jury, must be given an opportunity to do so absent an adversarial proceeding to determine by clear and convincing evidence that exigent circumstances exist to deny such a request

• Known exculpatory evidence must be presented to an investigating grand jury

• Abolition of plea bargaining or stricter guidelines to significantly curtail overcharging and to limit plea agreements entered into under threat, duress, and coercion

• Adoption of military grand jury procedures which are by far more even-handed, e.g., a target may challenge each count prior to the grand jury's deliberation

• Intentional destruction of evidence shall warrant dismissal of the complaint

• Codify a provision for dismissal of cases where 28 U.S. Code § 530B has been violated by a prosecuting attorney

• Redefine overbroad definitions of "a drug" under the Food Drug and Cosmetic Act.

"It is the proper duty of a representative body to look diligently into every affair of government and to talk much about what it sees. It is meant to be the eyes and the voice, and to embody the wisdom and will of its constituents. Unless Congress have and use every means of acquainting itself with the acts and the disposition of the administrative agents of the government, the country must be helpless to learn how it is being served; and unless Congress both scrutinize these things and sift them by every form of discussion, the country must remain in embarrassing, crippling ignorance of the very affairs which it is most important that it should understand and direct. The informing function of Congress should be preferred even to its legislative function. The argument is not only that discussed and interrogated administration is the only PURE and efficient administration, but, more than that, that the only really self-governing people is that people which discusses and interrogates its administration. The talk on the part of Congress which we sometimes justly condemn is the profitless squabble of words over frivolous bills or selfish party issues. It would be hard to conceive of there being too much talk about the practical concerns and processes of government. Such talk it is which, when earnestly and purposefully conducted, clears the public mind and shapes the demands of public opinion." GRAVEL v. UNITED STATES, 408 U.S. 606, 639 (1972)

Thank you for taking the time to read this Petition, for considering its relevance, and for acting upon it, to help breathe new life into the forgotten sentiment of "liberty and justice for all."

Thank you for Standing By Daniel.

Freeport, Texas, USAFebruary 27th - March 1st 2015For information about our seminar, contact us at This email address is being protected from spambots. You need JavaScript enabled to view it.Language: English

Directions to SeminarFreeport, Texas (approximate 45 miles south of Houston) - take Texas Hwy 288 south from Houston all the way to Freeport located at the Gulf of Mexico coast

Let us know if you have a group of people in your area and want to hold a seminar at: This email address is being protected from spambots. You need JavaScript enabled to view it.

NOTE: If you can’t attend a Seminar why not do an Online Video Course in your home.

• Bradenton, Florida - Contact: This email address is being protected from spambots. You need JavaScript enabled to view it.

• Santa Marta, Colombia – Contact: This email address is being protected from spambots. You need JavaScript enabled to view it.

Our goal is to have a Health Restoration Center in every country of the world with trained and experienced Genesis II Church Health Ministers and Bishops giving “Sacramental Guidance”.

We want to train 500 more Health Ministers this year to take control of their own health and that of their loved ones. This will help us “change the world”.

We are getting real close to 1500 Health Ministers worldwide. We now have 1470! Our next seminar is Freeport, Texas at the end of February. There are three areas that people had contacted us about holding a seminar in their areas.

Let’s continue to Stand By Daniel Almost 47% of the funds needed for this very important court case against the FDA has been donated. Help us to reach the goal as quickly as possible to end this injustice against all of us under this agency. They are not looking out for our safety but are working for the Big Pharma as most of the officials that retire from the FDA go on to high positions in the Pharmaceutical industry for their loyalty while working at the FDA, CDC and other corrupt agencies.

Time is running out and this is a very important case for “Health Freedom” in the U.S.A. as well as the world! If you want to help please donate at:

URGENT: Please sign Daniel's Hunger for Justice Petition on Change.org this very moment - asking Congress to investigate and impeach prosecutorial and judicial misconduct and to enact vital reform. Then share your support with everyone you know! It’s not too late. Believe in change!"

Please sign the above petition and get others to do the same. We have 1 month left before the March 3rd court case: Daniel Smith VS the FDA! We need 100,000 signatures!