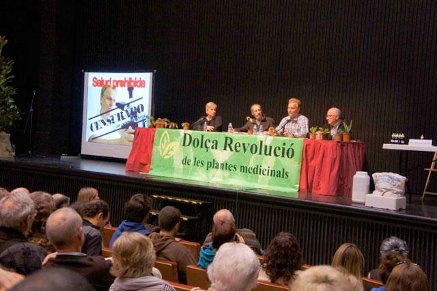 Andreas Kalcker seated 3rd from the left, at conference 8th December protesting his recent arrest for speaking on MMS.  Josep Pamies is seated to right of Kalcker.

As you may recall, Andreas Kalcker was briefly arrested a few weeks back related to a talk he gave at a conference in Ibiza, Spain.

Yesterday (December 8, 2012), Andreas along with Josep Pamies (famous for his Anti-GMO movement in Spain), as well as others, spoke at “Dolça Revolució de les plantes medicinal” which was a conference organized to protest the arrest and censorship of Kalcker.  There was a crowd of about 500 people from as far away as 900km.

We should have more information soon, but here are some of the highlights that were conveyed to us:

• Police were there, but did not arrest anyone.

• Police were asked if MMS could be sold or given away at the conference, but were told no.

• An 84 year old woman went on stage asking if she could buy MMS.  She was of course told no, as per the Police instructions.  She proceeded to tell those on stage and the audience, that in her 84 years, she had never stolen anything.  She then “stole” some MMS that was sitting on a table on stage… to the cheers of the audience.

• Numerous testimonials were given by people who had successfully used MMS to treat malaria, cancer, diabetes, Crohn’s disease, AIDS, etc.

• 3 doctors spoke about their experiences with MMS.

• 2 doctors spoke who were with an NGO.

• 1 speaker was the owner of an NGO who oversees 5,000 kids in Ethiopia and wished us well.

• One of the dignitaries in attendance was Bigas Luna, Spanish film director who is attributed to having discovered Penélope Cruz.

As always with love,