New evidence has surfaced supporting the authenticity of the leaked video from the MMS test performed by the Red Cross and their affiliate, the Water Reference Center.  While doing some simple googling of the topic, we found a link to a blog page that was deleted.  Fortunately, there was a Google cached page and therefore showed up in the search results:

We don’t know how long this link will work, so we made a screen capture and put it here:

According to Leo Koehof, Kerstin, the author of the blog, was a Red Cross volunteer at the test. 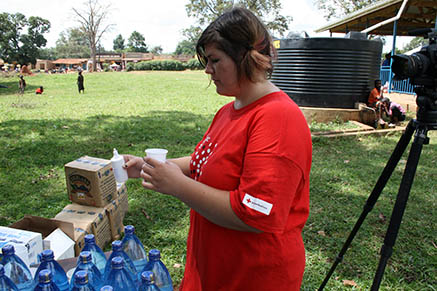 We don’t know why she deleted the original page which was located here:

Leo says, "I met Kerstin on the first day at the Iganga branch of the Red Cross.  We were introduced to the volunteers and informed them about the project for the upcoming week.  Some of the volunteers where posted at the table where we treated the people with MMS.”  Leo also reported to us that Kerstin had malaria herself at one point and treated it with traditional meds.  She treated herself at the test site as a precautionary measure.

This serves as yet more proof that:
1. The test took place.
2. Another witness that tells the same story as in the video.
3. The information is being censored to presumably hide the truth.

Kerstin depicted in the video "LEAKED: Proof The Red Cross Cured 154 Malaria Cases with MMS" at 11:54. Watch the video at 11:54 or click the image below:

Today we ask you to help spread the word by writing an email to the editorial department of Rolling Stone Magazine, strongly urging them to cover this story.   Explain what you know about the story in your own words and include the link to the leaked video:

Follow-up to Call to Action #2

We received a report that NaturalNews.com will be looking at the video.  Will let you know if something further develops.

Health Freedom Alliance did release a newsletter and article here:

If you haven’t done your part by taking action, check our most recent newsletters and please help.  Remember, WATCH, COMMENT & SHARE the leaked video at https://www.youtube.com/watch?v=FrwZN1cPfX8